VERNON (CBSLA.com) —The state issued an emergency order forcing a recycling plant in Vernon to shut down after tests show it may have poisoned groundwater and released dangerous levels of arsenic in the air.

The state Department of Toxic Substances issued the order against the Exide facility on 2700 South Indiana Street, citing air and ground pollution violations for arsenic and lead. Exide operates in 80 countries and is one of the world’s biggest producers, distributors and recyclers of lead-acid batteries.

A video released by the Department shows a damaged discharge pipeline at the facility reportedly pumping arsenic-filled water directly into the ground. Lead is also a byproduct of the melting process used in recycling car batteries, but the hazardous products are supposed to be safely removed and recycled before they show up in the air and water.

Sam Atwood, an official with the Air Quality Management District, said the facility in Vernon was causing relatively high cancer risk to more than 100,000 residents in an area that includes Maywood, Huntington Park, Commerce and Boyle Heights.

“This facility was found to have the highest cancer risk of any facility that we have studied over the 25 years of the program,” Atwood said…….

TO SEE THE VIDEO SHOWING THE DAMAGED DISCHARGE PIPE AND TO READ THE FULL STORY, CLICK HERE

State regulators took the highly unusual step Wednesday of suspending operations at a Vernon battery recycler that has discharged harmful quantities of lead for years and more recently has been deemed to pose a danger to as many as 110,000 people because of arsenic emissions.

The state Department of Toxic Substances Control said its order came after officials learned this spring that Exide Technologies, one of the largest car battery recyclers in the world, had been continuously releasing hazardous waste into the soil beneath its plant because of a degraded pipeline.

The temporary shutdown follows several Los Angeles Times stories about arsenic emissions from the plant, which air quality officials said pose an increased cancer risk to as many as 110,000 people living in Boyle Heights, Maywood and Huntington Park. The South Coast Air Quality Management District said the plant posed a higher cancer risk to more people than any of 450 operations the agency has regulated in the last 25 years.

“This facility poses an unacceptable risk to human health and the environment and must suspend its operations until it comes into compliance,” toxics department Director Debbie Raphael said. She said the company must figure out exactly how badly it has contaminated surrounding land and come up with an acceptable plan for cleaning it up…….. 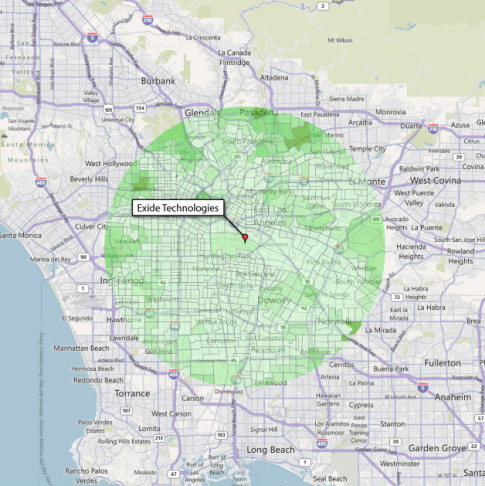 This image from the Department of Toxic Substances Control depicts that a quarter of the population around the plant lives below the poverty line. The lightest green zip codes are the poorest.

The California Department of Toxic Substances Control has shut down a battery recycling plant in Vernon whose own investigation revealed that it’s contaminating the soil around it. Exide Technologies recycles 22 million car batteries a year at its Vernon plant. The DTSC said Wednesday that it has suspended Exide’s operating permit.

“We have concerns today, right now, that are telling us we need to shut down that facility immediately to make sure that it is not releasing contaminants in the environment and not harming the communities that surround it,” said Raphael.

Exide has shut down operations immediately. Raphael says it can’t re-open until it proves that its operations are safe……..

A state agency ordered a Vernon battery recycler Wednesday to halt work, saying that hazardous waste and emissions are seeping into the soil and air, posing a public health risk.

The state Department of Toxic Substances Control alleges “metal bearing” waste is leaking from underground pipes at Exide Technologies, 2700 S. Indiana St., and the continued operation of the plant is unsafe.

Exide was served with an order to suspend operations because of “significant ongoing releases to the environment” and “unacceptable” health risk from airborne emissions to the community and workers, said the agency’s director, Deborah Raphael, during a conference call with the media Wednesday morning……..

A battery recycling facility in Vernon that is accused of leaking toxins into the soil was shut down by state officials on Wednesday.

The action against Exide Technologies in Vernon marked the first time since 1997 that a major hazardous waste recycler has had its permit to operate suspended, state officials said.

“We made a decision this poses an imminent danger to public health and we took the step of suspending Exide’s operations,” said Debbie Raphael, director of the Department of Toxic Substances Control…..

California regulators on Wednesday ordered the shutdown of a battery recycling plant in Vernon for failure to control pollution at the facility.

The plant has been operated under an interim permit for more than 30 years by Milton, Ga. battery maker Exide Technologies. It recycled about 22 million lead-acid automotive batteries annually.

Earlier this year, the South Coast Air Quality Management District issued a report saying the Exide plant was emitting hazardous levels of arsenic and other cancer-causing chemicals into the air, threatening the health of more than 100,000 nearby residents.

That report prompted the California Department of Toxic Substances Control to conduct an investigation of waste discharges from pipes at the facility. The agency found hazardous levels of toxic metals in the water flowing out of those pipes. The extent of the contamination of surrounding soil and underground water supplies is still under investigation.

The company said it is suspending operations in Vernon while evaluating its legal and regulatory remedies. It said it doesn’t know how long the suspension of operations at the Vernon facility will last.

The company is looking into possibly buying lead on the open market as well as seeking to negotiate agreements with third-party lead recyclers to provide some or all of the internal lead requirements that would have been provided from the Vernon facility.

Exide, which makes and recycles lead-acid batteries for vehicles and other machines, has posted weaker bottom-line results so far this fiscal year due in part to steep restructuring expenses, weaker-than-expected demand in some markets and higher input costs.

In February, the company reported it swung to a fiscal third-quarter loss as restructuring and impairment expenses jumped and as a tax benefit in France boosted year-ago results.

Shares closed Wednesday at $1.34 and were inactive in recent premarket trading. The stock has dropped 53% in the past 12 months.

View all posts by leadfreefrisco →