EXIDE VERNON BREAKING NEWS: AGAIN?! WHY IS THIS BEING ALLOWED?? ANOTHER VIOLATION OF FEDERAL AIR QUALITY STANDARDS – WHERE IS THE EPA?! Excessive lead emissions detected at Exide’s violation-ridden lead smelter

March 28, 2014 NEW
Additional Notices of Violation have been issued to Exide. A total of 3 Notices of Violation have been issued – one for each day the 30-day rolling average ambient lead concentration at the “North East” monitor exceeded 0.15  micrograms per cubic meter (µg/m3) (March 22, 23, and 24). Curtailment procedures will be implemented, as required by Rule 1420.1.

March 27, 2014 NEW
On March 27, 2014, Exide reported to the SCAQMD monitoring data showing exceedances of SCAQMD’s rule limits on outdoor levels of lead. The agency’s Rule 1420.1 prohibits Exide from causing the outdoor level of lead to exceed 0.15 micrograms per cubic meter µg/m3, based on a 30-day rolling average. In this instance, the “North East” monitor exceeded the 30-day average on Saturday, March 22nd and Sunday, March 23rd. Monitored lead levels on several individual days exceeded 0.15 ug/m3 by significant amounts. Exide is currently shut down to conduct a number of repairs, replacements and additions to their plant. These activities have likely caused the exceedances. SCAQMD staff is conducting investigations and activities at Exide to verify the cause of these exceedances. SCAQMD issued a Notice of Violation to Exide and implementing curtailment procedures for lead exceedances occurring on March 22nd and for failure to notify the SCAQMD within twenty-four (24) hours of when they received the laboratory analysis related to the exceedances. 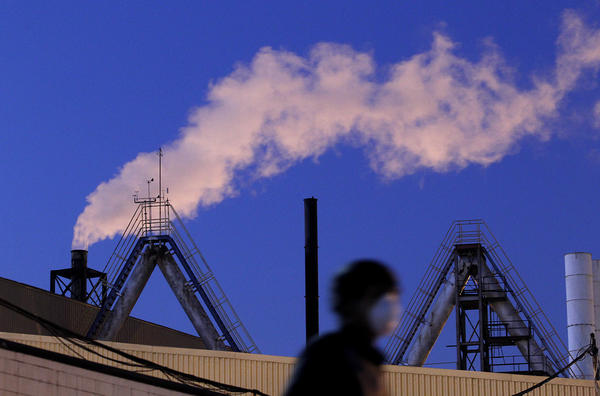 A Vernon battery recycler under fire for contaminating nearby homes with lead and threatening the health of more than 100,000 people with its arsenic emissions is in trouble once again for emitting more than the permitted level of lead, according to the South Coast Air Quality Management District.

A notice on the air district website said the agency will order Exide to curtail its operations as a result.

On March 22 and 23, an air monitor northeast of the sprawling Exide Technologies plant near the Los Angeles River picked up levels high enough to cause the outdoor air concentration of lead to exceed 0.15 micrograms per cubic meter based on a 30-day average — a violation of air district rules designed to protect public health.

The AQMD said the plant was not smelting batteries at the time; the company had shut down its operations to make repairs at the plant and apparently stirred up dust.

Exide’s latest troubles come less than two weeks after state officials revealed that soil tests had found elevated levels of lead in the yards of homes north and south of the plant, as well as at a park near a preschool. Lead is a potent neurotoxin, particularly harmful to small children and pregnant women.

Exide officials could not immediately be reached for comment.