EXIDE VERNON BREAKING NEWS: Deficient for a third time — after regulators have allowed it to operate with temporary permit for decades — DTSC gives Exide 30 days to submit appropriate application or lose permission to handle hazardous waste 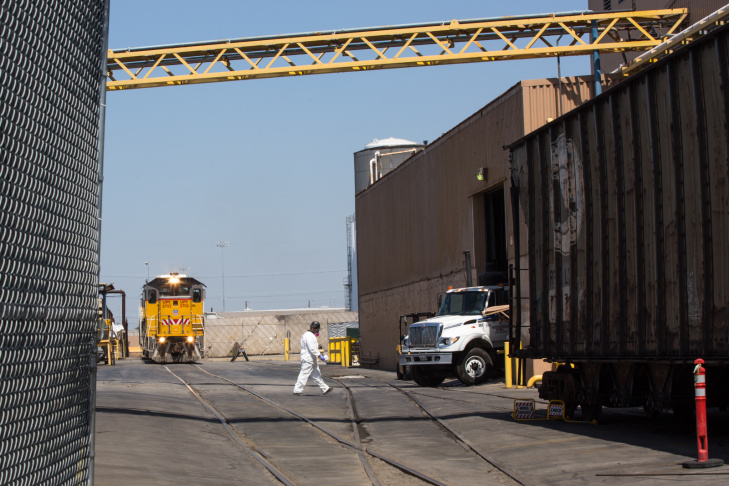 Exide has been smelting and recycling lead from batteries in Vernon, but it has never received a permit to do so. Instead it has been operating under temporary authorization for decades.

State toxics regulators announced Tuesday the troubled lead battery recycler, Exide Technologies, will lose permission to handle hazardous waste in Vernon unless it fixes problems in its application to do so.

For decades, Exide has had only temporary authorization to smelt and recycle lead from batteries. In recent years the company applied to the California Department of Toxic Substances Control for a real permit. Acting DTSC director Miram Barcellona Ingenito says regulators have told the company its application is incomplete for the third time.

“Exide Technologies has had three chances to submit a complete permit application that demonstrates the company can safely operate and close the facility, and each time Exide has fallen short,” Ingenito said.

DTSC says a key problem is the company has not told the state how it would clean up lead contamination or how much that cleanup would cost if it were to close. Exide has guaranteed just under $11 million for closure and cleanup expenses if it stops operating. Company’s critics say that’s nowhere near enough to do the job.

DTSC’s Rizgar Ghazi said Exide has 30 days to correct these and other problems.

Exide has filed for financial reorganization under federal bankruptcy code.

In a written statement, Exide vice president Thomas Strang (see additional information below) said the company plans to work with DTSC to complete the application on time.

A Vernon battery recycler, under fire for polluting the air with excessive amounts of lead and arsenic, has been given 30 days to correct shortcomings in its application for a permit to handle hazardous waste.

This is really their last shot at getting it right.– Miriam Barcellona Ingenito, acting director of California Department of Toxic Substances Control

A notice issued Tuesday by state regulators faults Exide Technologies for failing to describe the amount of lead-contaminated waste on the site, underestimating the cost to clean it up and not including a safety assessment for hazardous waste-holding tanks that could spill in an earthquake, among other deficiencies.

The California Department of Toxic Substances Control gave the company until July 17 to submit a permit application that shows it can safely operate and close the facility.

State law requires toxic waste regulators to begin steps to deny the company’s permit if it does not submit a complete application after three such notices. The lead acid battery smelter has been operating with a temporary permit for more than 25 years and has received two such notices, one in 2011 and another in 2012.

“This is really their last shot at getting it right,” said Miriam Barcellona Ingenito, acting director of the state toxics agency.

The plant has been a source of community outrage since last year, when it was revealed that the recycling plant’s arsenic emissions posed an increased cancer risk to more than 100,000 people across southeast Los Angeles County. The facility also has been cited for repeatedly emitting too much lead.

The plant has been idle since March, when the company suspended operations to install new equipment to meet tough new air district rules on arsenic emissions. After the South Coast Air Quality Management District’s hearing board and a Los Angeles County Superior Court judge denied the company’s request for more time to comply, Exide announced temporary layoffs for nearly all employees at the Vernon plant.

Community groups welcomed the move by the toxics department.

“This should have happened a long time ago,” said Roberto Cabrales, an organizer with the environmental justice group Communities for a Better Environment. “We’re hoping that this will put Exide on the right path to either follow the rules or shut down if they can’t.”

Exide said in a statement that it is working “to provide the additional information required to complete the permit application on a timely basis.” The company said it recently appointed two new executives to oversee the installation of new emissions control technology at the facility.

If Exide’s application falls short again, state regulators say they would move to deny the company’s permit and make a final determination after a 45-day public comment period.

“If DTSC terminates the permit application process, Exide is out of business, probably for years,” said David Pettit, an attorney with the environmental group Natural Resources Defense Council.

On June 11, Exide announced that it had appointed two new executives to lead its efforts to upgrade the Vernon smelter.

From Exide’s news release: ” ‘Tom and Chuck will drive a strong health and safety vision and culture at Exide,” said Robert M. Caruso, President and Chief Executive Officer of Exide Technologies. “They bring fresh perspectives and high levels of expertise to lead our efforts to upgrade our Vernon facility.’ …..Mr. Strang has a successful history in managing environmental remediation, implementing best practices and working collaboratively with diverse communities. Prior to joining Exide, he served as the Vice President of Environment Health and Safety, Regulatory Affairs, and Manufacturing Excellence for Chemtura Corporation where he developed and instilled the company’s safety culture globally. He held a similar role at Hercules Chemical, serving in a number of engineering, supply chain, and plant manager capacities.”

Mr. Strang is responsible for developing and managing regulatory compliance programs at the Vernon operation and other Exide locations. He also is overseeing the upgrades for the Company’s Vernon recycling facility. He joined Exide on May 5.

According to his public Linkedin profile, for five months before joining Exide, Mr. Strang was president of StrangSafety, LLC. Before that, he served from Feb. 2009 to Feb. 2014 as vice president, EHS&S, regulatory affairs and manufacturing excellence for Chemtura, a large global chemicals producer.

Chemtura filed Chapter 11 bankruptcy in March, 2009. The U.S. Department of Justice filed proofs of claims on behalf of the EPA and the National Oceanic Atmospheric Administration. The U.S.’s proofs of claim under the Comprehensive Environmental Response, Compensation, and Liability Act (CERCLA) pertained to past costs incurred and estimated future response costs at EPA-lead sites. The U.S.’s proofs of claim included a claim for penalties under CERCLA, the Clean Air Act (CAA), the Clean Water Act (CWA) and the Emergency Planning & Community Right-To-Know Act (EPCRA) due to alleged violations that stemmed from a fire at Chemtura’s Bio-Lab, Inc. facility in Conyers, GA, according to EPA documents.

Pursuant to two separate settlement agreements approved by the U.S. Bankruptcy Court for the Southern District of New York in 2010, Chemtura Corporation  agreed to resolve its liabilities at 18 sites across the U.S. for approximately $30 million in total.

The first settlement agreement (Multi-Site Settlement) was approved by the Bankruptcy Court on September 17, 2010 and addresses liabilities at 17 sites for approximately $26 million.

The second settlement agreement (Gowanus Site Settlement) was approved by the Bankruptcy Court on December 7, 2010 and addresses one site in New York for $3.9 million.

Before joining Chemtura, Mr. Strang served in a variety of management positions at Hercules Inc. — a major chemicals manufacturer and marketer — from 1982 until January 2009.  The positions included director, supply chain for FiberVisions and Pinova and plant manager, for Hercules’ Brunswick, Georgia facility.  Prior to that he held various management positions in engineering, maintenance and operations – often involving environmental policy, issues – at major Hercules manufacturing facilities including Hopewell, Virginia; Louisiana, Missouri; and Brunswick, Georgia.

The list below was compiled from a Google search of stories mentioning Hercules and Mr. Strang:

“Board denies Hercules’ plans to subdivide, sell. Company says it will consider legal action against boro”