Anyone who has given even passing attention to Exide’s global record regarding contamination of communities, the passing of decades in some cases before it even begins cleanup and how flawed those cleanups have been will not find this latest chapter inÂ the Exide’s ongoing negative impact on Frisco surprising at all.

File/Staff Photo
The Texas Commission on Environmental Quality is reviewing Exideâ€™s three scenarios to clean up its on-site landfill in Frisco. The company and the city prefer to seal the hazardous waste in place but dispute the method.

The city of Frisco has accused Exide Technologies of purposely downplaying the contamination from its former plant.

The amount and types of contamination are important because those will determine the level of cleanup required on Exideâ€™s property as well as the surrounding land, most of it city-owned.

â€œThis intentional minimization â€¦ forms the basis for Exideâ€™s flawed conclusion that little remediation is required for site closure and minimal institutional engineering controls are required,â€ reads a letter released last week from attorney Kerry Russell. He has been a longtime consultant for Frisco on environmental issues.

His letter is part of the cityâ€™s comments criticizing Exideâ€™s revised report on its Fifth Street property. The city cites inaccurate information as well as incomplete investigations done by Exide. Cleanup on and around the site is ongoing after decades of pollution from the battery recyclerâ€™s operations. Among the contaminants are lead, arsenic, cadmium, antimony and selenium.

Exide officials said they are working on a response to the city.

â€œExide continues to apply significant resources to properly close its recycling facility,â€ the company said in a statement. â€œTo date, the focus of those efforts have been decontamination/demolition of the facility and a thorough assessment of environmental conditions.â€

The company is seeking approval from state regulators for the next steps in its cleanup efforts. Exide officials say they have a highly qualified team assigned to Frisco and are following applicable laws and procedures set out by the Texas Commission on Environmental Quality.

Officials with the TCEQ are still reviewing the report. They expect to finish in the next several weeks. Spokesman Terry Clawson said the agency did not want to comment before its review is complete. But it will keep Friscoâ€™s comments in mind as it moves forward, he said.

The plant closed in November 2012 as part of an agreement with the city. But cleanup efforts in Frisco have been hampered by Exideâ€™s bankruptcy filing in June 2013.

On Thursday, court-ordered mediation is scheduled to begin in Austin. Representatives for Exide, the city of Frisco, the TCEQ and the Department of Justice on behalf of the U.S. Environmental Protection Agency will participate. Bankruptcy documents say the mediation is meant â€œto resolve certain outstanding disputes between and among them.â€ The order did not elaborate.

The proceedings are confidential. Any discussions or documents created as part of the mediation are not to be revealed, the order states.

Also under TCEQ review is Exideâ€™s evaluation of options for its on-site landfill. The landfill contains hazardous waste in violation of the companyâ€™s permit. Last year, the TCEQ issued a notice of enforcement, alleging Exide mishandled and improperly treated hazardous waste at the plant dating to 1998.

The report notes that each option results in a similarly low risk over the long term. But that the second and third options carry higher risks in the short term because of the potential for exposure to workers and the community when the waste is dug up.

The third option, for example, calls for an estimated 130,000 cubic yards of concrete-like material plus landfill liner material to be hauled off by truck. Thatâ€™s 21 to 42 trucks a day â€” 15,500 truckloads total â€” over a one- to three-year period. The waste would be trucked about 250 miles to the nearest facility that will accept it.

City officials generally prefer that option as well. But they disagree with Exideâ€™s proposed methods, saying theyâ€™re not suitable for long-term protection. TCEQ officials will ultimately decide what to do.

In addition, the TCEQ has completed its review of a report on the undeveloped land that Exide owns and Frisco intends to buy. The city has set aside $40 million for the purchase. It made an additional $5 million available to Exide for costs related to the plantâ€™s closure per the 2012 agreement.

As part of its comments dated Sept. 25, the TCEQ says it cannot certify the cleanup as complete on that land until remediation is done on Stewart Creek, which flows through plant property. Exide had proposed that the creek work be done later along with cleanup at the site of its operating plant.

Frisco officials say the decision is key because it means the cleanup will not be done piecemeal on the various properties.

â€œWe have long argued that the overall site closure plans needed to be coordinated,â€ Russell said, adding that itâ€™s â€œvery important, we think, for the future protection of the citizens of Frisco and the Stewart Creek watershed.â€ 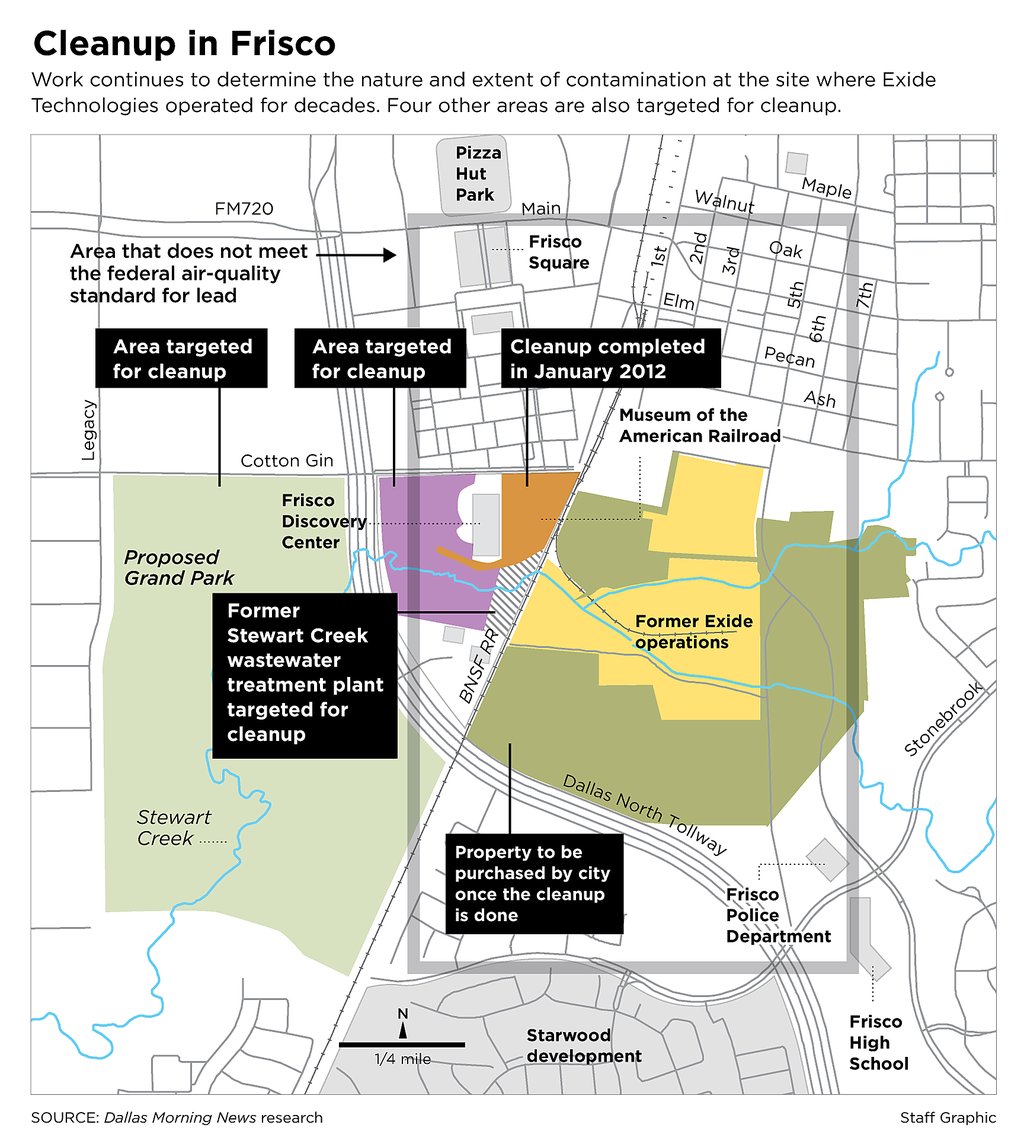