Fish bones are made of the phosphate mineral apatite, which readily combines with lead to form pyromorphite, a stable crystalline mineral that can’t be absorbed by the human digestive system.1,2 Now researchers are using fish bones and other phosphate-rich amendments to remediate lead in urban soils. “We have seen reduction in bioaccessibility in some lab samples up to fifty percent within just a few weeks of treatment,” says Steve Calanog of the U.S. Environmental Protection Agency (EPA), who is overseeing an agency project using fish bones to clean up soils in the South Prescott neighborhood of Oakland, California.3

To Nullify Lead, Add a Bunch of Fish Bones 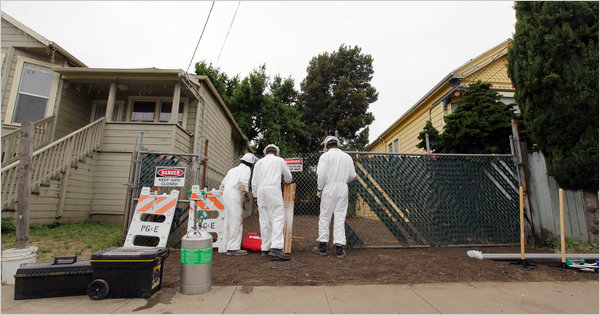 Workers at a lot in the South Prescott neighborhood in west Oakland, Calif., where fishbone meal was applied to tainted soil.

OAKLAND, Calif. — Alaskan pollock is usually the faux stand-in for crab meat or the main ingredient in fast-food fish sandwiches. But now the flaky fish is moving into a new realm — as part of the solution to one of the nation’s longest-running toxic waste problems.

A sack of crushed fishbone that is worked into the soil to neutralize the lead. The process has been used at military bases.

Today, there is more lead contamination in America’s cities than any federal or state agency could ever afford to clean up and haul away. So scientists and regulators are trying a new strategy, transforming the dangerous metal into a form the human body cannot absorb, thus vastly reducing the risk of lead poisoning.

The principle is straightforward, said Victor R. Johnson, an engineer with Civil & Environmental Consultants Inc. “The fish bones are full of calcium phosphate,” he said. “As they degrade, the phosphates migrate into the soil.” The lead in the soil, deposited by car exhaust from the decades when gasoline contained lead or from lead-based paint residue, binds with the phosphate and transforms into pyromorphite, a crystalline mineral that will not harm anyone even if consumed.

This alchemy has been practiced in university and commercial laboratories for more than 15 years, and more recently has been employed at acid-mine sites and military bases.

But now it is also coming to residential neighborhoods like South Prescott in Oakland, which this month became the first in the country where fishbone meal is being mixed into the soil for lead control under a project organized by the Environmental Protection Agency.

“It’s fair to say, looking forward, that just about every urban residential area probably has a lead problem and we just can’t afford economically and socially to move that amount of dirt any more,” said Steve Calanog, the E.P.A. official in the San Francisco office that is overseeing the project. “Topsoil is a precious resource, and we don’t have enough topsoil to replace it.”

Although the agency does not record its spending by individual contaminants, it is safe to say it has spent millions of dollars on lead cleanup. If the new techniques of neutralizing toxic metals catch on the money would go further by replacing the method of digging up and disposing of hundreds of thousands of tons of soil that has been used for more than two decades.

The effects of lead poisoning, particularly on young children’s ability to learn, have long been recognized by scientists. Yet lead remains one of the most prevalent contaminants in the country, particularly in urban areas.

The project in South Prescott, expected to cover a six-block area and cost $4 million over two years, will train up to 75 workers, many previously unemployed, in toxic cleanup methods. In this 100-year-old neighborhood of west Oakland, the average contamination levels in the soil are twice the federal limit of 400 parts per million, and some hot spots have lead levels five or six times greater, Mr. Calanog said. South Prescott was built on landfills holding the detritus of the 1906 San Francisco earthquake. When the houses were built for workers at the nearby railyards, pipes and paint contained large quantities of lead. Later, trucks rumbled by on the way to the port of Oakland, and highways were built nearby.

When it came to fixing the problem, local E.P.A. officials consulted with community leaders. The fishbone approach appealed to everyone involved because no one liked the idea of the heavy construction associated with soil removal, or the idea of taking and dumping the toxic soil on another community, Mr. Calanog said.

“The whole notion of adding an amendment to the soil to change the mineral form of a contaminant and make it safe is great,” said Sally Brown, a research professor in ecology and environment at the University of Washington. Other scientists have looked at materials like leaf compost or manure, while Professor Brown favors composts high in iron content, like the sludge from wastewater treatment.

When the ground dug for Michelle Obama’s vegetable garden at the White House was found to have some lead (93 parts per million), ground crab shells were added to help neutralize the toxicity. Pollock processed in Alaska works particularly well because by the time it has been processed for fillets, soup and food for Japanese eel farms, all remnants of meat have been blown off with large industrial blowers and the dry bones clink when they touch one another.

Maggie O’Donnell, the president of the project’s contractor, SFS Chemical Safety Inc., is looking for a place to store the 1.1-ton sacks of fishbone meal being shipped in from processing plants in Dutch Harbor, Alaska. She and her colleagues estimate they will need one sack of bones per contaminated front or backyard, and they have as many as 149 yards to go, provided the property owners agree to the cleanup. SFS officials said workers will be able to work around plants and trees without harming them.

So far they have finished one yard, a large vacant lot on Henry Street. There, workers trained in construction and other job skills by the Cypress-Mandela Training Center spread a paste of dampened bone meal before the Fourth of July weekend and, with a powerful rototiller, worked it into the soil.

Judith Wright, a chemist whose Richland, Wash., company, PIMS NW, supplies the bone meal, said that while the lead and phosphate could bond instantly if they were dissolved, the process might take a few weeks in the ground.

There was one unexpected glitch in the first fishbone application. Four young men, each wearing white Tyvek coveralls, topped some of the redolent mixture with topsoil, put tarps over the rest and left for the holiday weekend.

The temperature was above 90 degrees.

“It kind of got cooking,” Brian Davis, one of the Cypress-Mandela workers, said about the fishbone meal.

When the tarps were removed four days later, the stench hit the workers like a hammer; topsoil was quickly applied.

Connie Davis, 76, who lives across the street from the treated yard, said: “You could smell a rotten smell. At first we didn’t know what it was.” A week later, no smell could be detected as the workers tamped down a final layer of topsoil.

Mr. Johnson, the engineer, said in the future work areas would be tackled a couple of square yards at a time, with each covered completely before work began on the next place. “Speed is important,” Ms. O’Donnell added.

Mr. Calanog does not see this as a problem. “The smell is not of fish,” he said. “It’s of toxic lead going away.”

A version of this article appeared in print on July 21, 2011, on page A12 of the New York edition with the headline: To Nullify Lead, Add a Bunch of Fish Bones.