CLICK HERE TO READ THE DTSC SUMMARY OF VIOLATIONS AGAINST EXIDE

But it probably stems from Exide’s long history of environmental negligence, having contributed “through deposition, approximately 424 lbs. of lead in both 2004 and 2005 and 712 lbs. of lead in 2006 to the watershed,” and the current charge that Exide had “failed to minimize the possibility of any unplanned sudden or non-sudden release of hazardous wastes or hazardous waste constituents to air, soil, or surface water” by not addressing corroded pipes (something it has also had problems with in the past).  — StreetsBlog LA 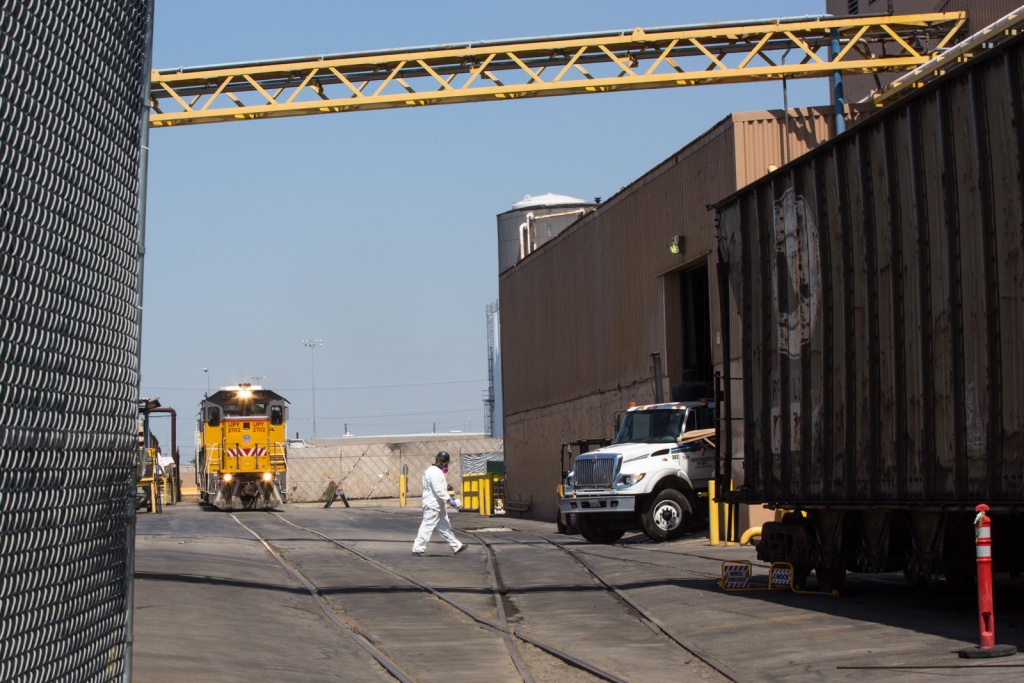 In this May 29, 2013 file photo, an employee wearing a breathing mask works at Exide Technologies, a battery recycling plant that has discharged harmful amounts of lead into surrounding communities. The company was hit with eight new violations over conditions at its Vernon plant, the Department of Toxic Substances Control said on Wednesday, January 28, 2015. MAE RYAN/KPCC

California toxics regulators have slapped eight violations of state hazardous waste laws on lead-battery recycler Exide Technologies, whose Vernon plant is one of two such facilities west of the Mississippi.

The Department of Toxic Substances Control discovered the problems during site visits in the last seven weeks, including during an unannounced inspection conducted jointly with the federal Environmental Protection Agency.

Exide’s smelter has been closed since last March under regulatory order. Its operations have been under increasing scrutiny since a study released by the South Coast Air Quality Management District in 2013 concluded that airborne pollution from the plant significantly raised cancer risks for workers and for more than 100,000 households in Maywood and sections of East Los Angeles.

The company had recycled about 22 million batteries annually under state-granted authorization that, while technically temporary, existed for decades. But the company has said it intends to reopen and has applied for a permit from the DTSC.

“This particular inspection [in January] was a little bit different in that it was to ‘ground truth’ their permit application,” said DTSC’s deputy director for communications, Jim Marxen.

During a two-day visit last week, inspectors found sludge stored in a temporary system of unlined tanks, along with open containers of lead-battery wastes, some of which weren’t labeled correctly, making it impossible for regulators to determine how long they’d been there.

Those and other major violations require immediate corrective action. State toxics officials noted holes in the walls and roof of the Vernon facility, and demanded that Exide cover them with tarps.

In a statement, Exide representatives said they were already working to correct the violations

“The Company […] will continue to work with the DTSC so that all applicable standards and protocols are met,”  said Tom Strang,  Exide’s vice president for environment health and safety. “We intend to operate a premier recycling facility.”

The statement said Exide is working to install new systems to reduce pollution and comply with California’s air quality standards.

The company has until the end of the year to win a permanent operating permit from DTSC or cease handling toxic materials at the facility.

Last November, DTSC officials demanded that Exide lay out about $49 million towards cleanup, closure, penalties and costs – pending the approval of a federal bankruptcy judge.

Now that state regulators have issued this most recent notice of violations, Exide Technologies has 10 days to point out mitigating circumstances or dispute violations. As the process plays out, the company is likely to receive financial penalties, says the DTSC’s Marxen.

“These violations, the violations last year, and all prior years are part” of the record DTSC will use in considering Exide’s application for a lasting permission to operate, Marxen said. The DTSC has no deadline for completing its assessment of Exide’s operations. “The ability and willingness of a facility to stay in compliance and come back into compliance is a big part of a permit consideration.”

A press release sent out by the Department of Toxic Substances Control (DTSC) this morning states that the DTSC has issued eight violations of state hazardous waste laws against embattled Vernon lead-acid battery recycler Exide for violations discovered during recent facility inspections it conducted with the U.S. Environmental Protection Agency.

The violations are of concern.

Exide was ordered to cease smelting operations in March of 2014 because of its struggle to comply with new rules issued by the South Coast Air Quality Management District (SCAQMD). The rules, approved in January of 2014, established requirements for the reduction of arsenic emissions and other key toxic air contaminant emissions, set requirements for ambient air concentration limits for arsenic, as well as hourly emission limits of arsenic, benzene, and 1,3-butadiene (all known carcinogens), and contained additional administrative, monitoring, and source testing requirements for stack emissions at lead-acid battery recycling facilities.

Unwilling to take responsibility for the health risk assessment, which had found that arsenic emissions from the plant posed an elevated cancer risk to as many as 110,000 people living in surrounding areas, and displeased by the more stringent emissions standards which required that Exide install costly new “negative pressure” air filtering equipment by April 10, 2014, Exide promptly sued.

To the relief of most residents, Exide lost its appeals and was forced to remain closed while cleaning up the facilities and making the required upgrades to the plant.

Which means that the current set of violations are a result of Exide’s failure to properly manage the very processes intended to help it operate more cleanly.

In the press release, DTSC inspectors cite the “treatment of contaminated sludge in tanks that Exide is not authorized to operate at its Vernon facility” and the failure to “sufficiently protect against spills in an area where [Exide] stores materials, including battery acid” as being among its more egregious violations.

Terrible as they sound, these violations may not necessarily come as a huge surprise. For some time, the DTSC has accused Exide of failing to paint an accurate picture of the amount of lead-contaminated waste on the site, the sites and containers in which it is be located, the safety assessments of tanks holding hazardous waste to withstand earthquakes, or even the kinds of sampling that would need to be conducted after-the-fact to ensure the site was properly cleaned up.

Which is probably why I found the statement that the DTSC “notified Exide that it must immediately take steps to ensure that rain cannot enter the building” by addressing the “holes in the walls and ceiling of the building” inspectors had spotted to be somewhat more alarming.

At first, I thought my alarm stemmed from having spent too much time looking at some of the photos of inspectors in hazmat suits making their way past piles of waste and corroded walls in the interior of the plant (below) and imagining what kind of horrible damage that could do if it ended up in our waterways (see more here).

But it probably stems from Exide’s long history of environmental negligence, having contributed “through deposition, approximately 424 lbs. of lead in both 2004 and 2005 and 712 lbs. of lead in 2006 to the watershed,” and the current charge that Exide had “failed to minimize the possibility of any unplanned sudden or non-sudden release of hazardous wastes or hazardous waste constituents to air, soil, or surface water” by not addressing corroded pipes (something it has also had problems with in the past).

The DTSC and EPA inspectors evaluated the plant over a two-day period last week and also conducted some oversight of activities at the plant on December 12, 2014.

The evaluation was part of the DTSC’s ongoing assessment of Exide’s third application for a formal permit allowing it to handle hazardous waste. [As Exide-watchers may know, Exide took over operations at the Vernon site from Gould-National Battery in 2000, but didn’t submit a formal permit application until 2011. The DTSC found its 2011 application to be deficient, as well as that submitted in 2012, and the most recent 2014 application. The DTSC is currently reviewing Exide’s revision of its 2014 application and has until the end of 2015 to either grant the permit or begin the process of shutting down the plant for good.]

With regard to Exide’s most recent violations, the DTSC states it has “directed Exide to protect public health by immediately stopping all violations.”

And while area residents will likely note with chagrin that that sort of language has held little sway with Exide in the past, the DTSC has imposed a deadline of 10 days within which Exide must submit documentation that the violations have been addressed. Should they fail to do so, they will face penalties and, possibly, additional enforcement actions.

If you’d like to see the summary of all eight violations, you can find that here. General information on DTSC’s interactions with Exide can be found at their website, here.

Exide Technologies is in trouble again with state environmental regulators who on Wednesday cited the Vernon battery recycler for eight hazardous-waste violations.

In a statement, Exide Vice President Tom Strang said “the company is already taking action pursuant to the notice and will continue to work with the DTSC so that all applicable standards and protocols are met. We intend to operate a premier recycling facility.”

The agency cited Exide for several other violations found during the Jan. 20 and Jan. 21 inspections, including improperly labeling hazardous-waste containers including improperly labeling hazardous-waste containers. Inspectors also found holes in the facility’s walls and roof. The state said the company must show that it has corrected the problems within 10 days.

Exide also failed to properly report a Jan. 12 spill of sodium hydroxide, a caustic liquid used in the recycling process, the toxic substances agency said. The chemical did not make it off-site and was captured and disposed of properly, the agency said. Because the spilled liquid is not classified as hazardous waste, that incident was referred to the city of Vernon for investigation.

The citations are the latest in a series of pollution and waste troubles at the plant about five miles southeast of downtown Los Angeles. Exide recycles lead from used automotive and industrial batteries. It has been under fire from community groups since a March 2013 report revealed its emissions of arsenic, a cancer-causing pollutant, posed a health risk to more than 100,000 people across southeast Los Angeles County.

Exide has been cited repeatedly for releasing too much lead into the air and is paying to clean lead-tainted soil from homes in nearby Maywood and Boyle Heights under an agreement reached with state regulators in November. The facility has been idle since March as the company works to install new pollution controls.

The company is in Chapter 11 bankruptcy proceedings, under criminal investigation by a federal grand jury and has been sued by regional air quality regulators and nearby residents.

The U.S. Environmental Protection Agency inspected the Exide plant in August 2014 and its investigation is ongoing, a spokeswoman said.

The state Department of Toxic Substances Control has for decades allowed the facility to operate with a temporary permit. Under a California law signed last year by Gov. Jerry Brown, the state is required to shut down the facility if it does not obtain a full permit by the end of 2015.

The state inspected the Exide plant “to make sure that the permit application correctly reflects all of the conditions at the site,” said Barbara A. Lee, director of the state Department of Toxic Substances Control. The newly discovered problems will factor into the agency’s decision and could also result in fines, she added.

Liza Tucker with the nonprofit advocacy group Consumer Watchdog said “given Exide’s egregious pollution and overt sloppiness, attested to by these violations, the company should be shuttered.”

5:59 p.m. This post has been updated to clarify the U.S. Environmental Protection Agency’s role in inspecting the Exide plant and to add details about holes found in the building.