EXIDE VERNON BREAKING NEWS: DTSC to begin immediate cleanup of contaminated homes near Exide lead smelter after revelation that up to 10,000 homes could have significant lead exposure 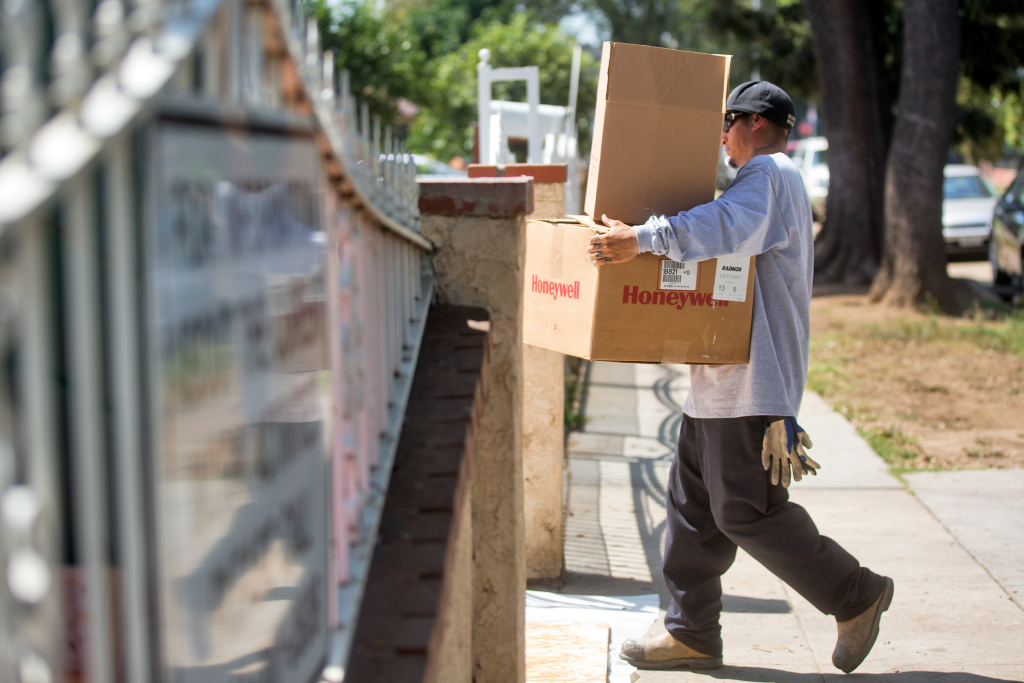 Equipment for removing lead-polluted soil arrives at a Boyle Heights home in 2014. It’s one of more than 200 homes at which Exide has been required to remove lead contamination.
MAYA SUGARMAN/KPCC

The news comes nearly a week after the Department of Toxic Substances Control revealed it had found lead contamination at more homes around the shuttered Exide lead battery recycling plant in Vernon.

Department of Toxic Substances Control Director Barbara Lee said the state will fund $7 million in clean up and additional testing, and regulators will immediately begin testing those whose homes have been found lead levels above 1,000 parts per million. They’ll begin the clean up with those areas most affected, Lee said.

The agency cautioned it had yet not determined where the lead had come from, but that the need for urgent remediation was clear.

“As a medical person, I care about lead. I don’t care where it comes from,” Gina Solomon, Deputy Secretary for Science and Health at California Environmental Protection Agency told an exasperated audience.

Whether in air or soil, lead pollution is harmful to human health, particularly the health of children and pregnant women. It can lead to learning disabilities and birth defects.

Solomon advised residents to wipe their feet thoroughly before entering their homes, and to cover bare dirt in and around their yards to minimize exposure for children.

Lee said she intends to find more money to assist with the clean-up. She estimated the cost of cleaning a single home could reach $39,000, though she added that might go down as the effort scales up.

The meeting, which took place at the Huntington Park Community Center, was called to discuss preliminary test results that show that as many as 10,000 homes within two miles of the plant could have elevated levels of lead in the soil.

For decades, the plant smelted used car batteries, sending lead contamination into the air. Exide is already on the hook for cleaning up more than 200 homes in neighborhoods just north and south of the plant.

DTSC’s Lee had vowed to find additional money to expand the clean-up after news that lead contamination had spread. The new findings come from thousands of soil samples taken at 146 homes within a two-mile radius of the plant.

“We have preliminarily estimated the number of residential properties potentially affected could be five to six thousand, or as high as nine to 10 thousand,” Lee told reporters Friday. “It is certainly a large extent of impact.”

Last year, DTSC made Exide responsible for cleaning hundreds of homes in a smaller area. Since then, technicians supervised by the agency took thousands of samples further from the smelter, in an effort to determine the extent of the pollution.

The latest results found lead at more distant properties at levels similar to homes closer to the plant. Tests at some locations found lead at hundreds of parts per million higher than the state’s benchmark of 80 ppm, which triggers further testing into health risk. A small fraction of results are higher than 1,000 parts per million, a level at which state and federal authorities mandate additional inquiries and, in some cases, immediate action.

Lee said the DTSC is working on a cleanup strategy for the expanded area. But she emphasized that action would not be immediate. That’s because no tests have found levels of lead above 1,200 parts per million at homes where children or elderly adults lived — a criteria used by the federal government to decide when to take emergency action.

Still, Lee said, “we are moving to take action as quickly as we can.”

“It is appalling,” Consumer Watchdog’s Liza Tucker said earlier this week. “The DTSC needs to own up to the fact that we have an extensive problem. The buck stops with them.”

Exide settled criminal allegations with the U.S. Department of Justice in March, and settled environmental violations with the DTSC last November. Under the terms of those deals, the company has set up a $9 million trust fund for cleaning up lead-contaminated soil from 219 homes. The bankrupt company also has set aside more than $38 million for closure and remediation of its property at 2700 Indiana Avenue in Vernon.

So far, Exide has cleaned up two-thirds of those homes. Authorities still have not tested two dozen homes, in some cases because they’ve had trouble making contact with landlords who don’t live at the property.

Even cleaning up a fraction of the potentially contaminated homes in the expanded area would require a dramatic increase in budget, multiple environmental and community advocates have said.

DTSC has declined to estimate the additional costs of cleaning up additional homes.

But Lee has said that the DTSC would seek a “funding stream” to pay for cleanup, and suggested that cleanup costs would be paid back by multiple lead polluters in the industrial corridor – not just Exide. Lee has acknowledged “there may be other potentially responsible parties as well.”

Exide officials have said they do not believe the Vernon facility was the source for newly disclosed lead contamination.

The company commissioned a study from Mitchell Small, a professor of environmental engineering at Carnegie Mellon University. In the study, Small concluded that levels of lead in the additional homes sampled didn’t not exceed background levels derived from other sources.