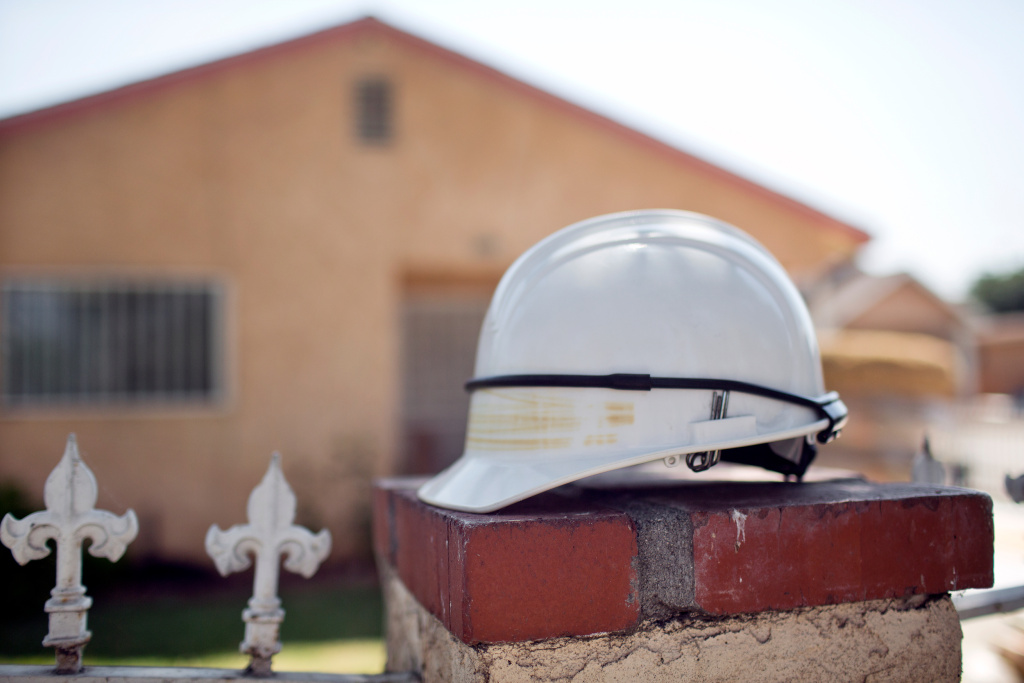 While more testing is expected, Exide and regulators are still negotiating over how to conduct the next stage of the work. The governor’s emergency funding for Exide clean up is stalled in the state Legislature over environmental regulations.  MAYA SUGARMAN/KPCC

Community and environmental groups are trying to persuade Gov. Jerry Brown that his proposed emergency legislation to provide $177 million for the Exide cleanup should not bypass state requirements for environmental review of the effort.

When Brown called last month for the money to be loaned to the Department of Toxic Substances Control, which is overseeing the cleanup, his proposal included an exemption to the California Environmental Quality Act “for the purposes of expediting the cleanup” of lead and other toxins from communities around the former battery recycling plant in Vernon.

The disagreement has caused the two bills related to the funding to stall in the state legislature, according to four senior legislative sources and community activists involved in the discussions.

The act, known as CEQA, requires state and local agencies to identify, avoid and mitigate significant environmental impacts of their work. Under CEQA the Department of Toxic Substances Control would have to conduct a review of the project and how it would impact the environment. The process calls for public meetings and transparency for the community involved.

“The reason we are in this whole mess is because the state didn’t fully understand the impact of Exide on our communities,” said Lopez, who is also a member of the state’s Exide community advisory board. “If this CEQA exemption would move forward, it would present a huge step back, this would be the old [Department of Toxic Substances Control] not understanding the potential health impacts on our community from this cleanup.”

Brown spokeswoman Deborah Hoffman acknowledged that “the community has raised a number of questions and valid concerns” about the proposed CEQA exemption, which she said was included in the package to “avoid up to a year of work delays.”

Brown’s office “will continue to work with residents and elected representatives to address these concerns, while ensuring the cleanup can get underway,” Hoffman said, adding that the governor’s plan “ensures homes, schools, daycare centers and parks are tested and cleaned up as quickly and safely as possible.”

Local community and environmental groups have sent letters to state legislators and to Brown’s office protesting the exemption.

“CEQA is designed to protect our communities and if there is a weakening of CEQA that will be a clear sign that defending our communities will continue to rest on the shoulders of our community leaders the state is not interested in properly prioritizing our health an well-being….Weakening CEQA is not the way we need you to move quickly,” says a letter from East Yard Communities for Environmental Justice.

Another letter signed by 33 environmental and community groups from across the state asks the governor to withdraw the exemption from his proposal.

“Exemptions from laws designed to protect the public’s heath harm all Californians by setting a precedent for unequal protection under the law. Environmental justice communities already bear the brutal brunt of past and present government policies which concentrate pollution in communities already reeling from over-exposure to environmental hazards,” the letter reads.

The Natural Resources Defense Council also weighed in, saying in a letter that the exemption is “inappropriate and unnecessary.”

“The communities near Exide deserve to know whether there are safer, quicker or more thorough approaches to decontaminating their homes than what DTSC has proposed….And  given DTSC’s historically weak oversight of Exide, the communities need mitigation measures that are enforceable in court in case DTSC fails to move vigorously, as it has in the past.”

Lopez said he and other community activists discussed the issue in Los Angeles on Tuesday with representatives from the governor’s office and Toxic Substances Control Director Barbara Lee.

The activists made the case that the governor’s office should withdraw the exemption from Brown’s proposal, said Lopez.

The governor’s office would not address specifics of the CEQA exemption or what transpired at the meeting.

Toxic Substances Control officials said the Brown administration speaks for the agency on this issue.

Activists, who have been pushing for years for faster action on Exide contamination, acknowledge that following the CEQA process could add more time, but they say the transparency and protections the Act provides are worth it.

Lopez said the community groups hope to come to an agreement with the state without losing CEQA protections but also to find a way to expedite the process.

“We heard it would take six months to complete the process for an environmental impact report,” he said, but added that “more than anything we want to make sure we are protected.”

It has been five weeks since Brown asked the Legislature to approve the funding. At that time lawmakers, county and city elected officials and some community members celebrated the news with press conferences and accolades.

Since then, the bills to move the funding forward have stalled. Neither is scheduled for a hearing before its respective budget committee. One measure would appropriate the $176.6 million for the testing and cleanup effort. The other bill, which is supposed to include the CEQA exemption, has not yet been written.

“We’re waiting for the administration to meet with stakeholders and circle back around with us and [Toxic Substances Control] to figure out the best way to do it,” said Assemblyman Miguel Santiago (D-Los Angeles), lead sponsor of the CEQA measure.

Santiago declined to say the bill has stalled; he described the dispute over the bill as routine.

“My priority is to ensure that our neighborhoods are cleaned up, the 1.7 mile radius around the Exide area … who have not had environmental justice issues really addressed in the last several years,” he said. “At this point in time it’s a point of deliberation of what’s the best process going forward.”

Assemblywoman Cristina Garcia (D-Commerce), is a co-sponsor of Santiago’s bill. She said she supports the exemption because it means the process will be expedited. She said it would only apply to trucks hauling contaminated dirt out of the area. That way, more of them could travel at the same time through the neighborhoods.

“You can’t tell a community not to go outside, not to play in the yard, for thirty years, that makes no sense,” she said. “In the end the governor with the Legislature is working to find ways to expedite while maintaining quality and public safety and keeping the community informed.”

She said she is open to alternative ideas on how to speed up the process.

Other state legislators, including Senate President Pro Tem Kevin de Leon (D-Los Angeles), who authored the appropriations bill, declined to comment directly on the issue but said they are working with the community and the governor’s office on the matter.

“My top priority since the beginning has been to decontaminate the yards of these residents as quickly as possible,” Solis said in a statement. She has sharply criticized the state in the past over the pace of the cleanup.

“While I respect the concerns raised by environmental groups, my primary concern is for the children and families who are living and playing in contaminated homes and yards right now,” said Solis. “We cannot allow this cleanup to be held up in court or slowed down,” she said, adding her hope that Brown “will undertake this cleanup in the most environmentally responsible manner possible.”

Exide smelted batteries in Vernon until last year when the state ordered it to shut down after it operated for decades on a temporary permit. At the time, Toxic Substances Control said a few hundred homes closest to the site would be tested and cleaned up. Last August, the agency said up to 10,000 properties could be contaminated in the 1.7 mile area around the smelter.

Since then, of the more than 1,000 properties that have been tested by the state and L.A. County, more than 99 percent will need to be cleaned up and one in five showed lead levels higher than 1,000 parts per million, considered the highest priority for cleanup by the state agency.

Exide-impacted communities are familiar with the CEQA process.

The site of the former Exide plant is currently undergoing a CEQA environmental impact process as the state works on a cleanup. And neighbors in the area have been through the process before with projects along the 710 and other freeways.