FRISCO â€” Nearly five years after shuttering its plant here that emitted too much lead,Â Exide Technologies has sued the city, claiming that its actions are thwarting the company’s cleanup efforts.

The suitÂ contradicts Frisco’s claims over the years that Exide has continually tried to cut corners to save money. Without the proper cleanup, the city has stated, re-contamination of the nearby land is a “distinct possibility.”

On Monday, the city of Frisco issued a statement denying the allegations in the suit, which was filed in federal court in Sherman last week. Exide’s attorney declined to comment.

In 2012, Exide and Frisco reached an agreement that spelled out terms for the plant’s closure and cleanup. At the time, the company had 130 employees and recycled about 6 million used automotive and industrial batteries a year with a secondary lead smelter.

The deal called for Exide to retain the 90 acres it used for operations. Frisco, in turn, would pay $45 million to purchase about 180 acres that Exide had used as a buffer to those operations. The money comes from the Frisco Economic Development Corp. and the Frisco Community Development Corp., which would use the land for future projects or sell it.

In aÂ schedule posted three years ago, Exide showed the work in Frisco being completed in stages with final approvals in hand by this fall. But the closure and cleanup haveÂ taken much longer than anticipated. Some of that delay was due to all the work needed to identify the contamination, which had spread beyond the plant’s boundaries. Exide’s bankruptcy filing in 2013 also slowed down the process. But a lot of issues stem from disagreements between Exide and the city over what needs to be done.

At issue are several hundred acres contaminated by hazardous heavy metals during the plant’s more than 50 years of operations. Surveys have documented elevated levels of lead, arsenic and cadmium on Exide’s property as well as surrounding land, much of it owned by Frisco. Sediment in Stewart Creek is also polluted for several miles downstream of the Exide property. Groundwater contamination is also a concern.

The Texas Commission on Environmental Quality is the state agency overseeing the cleanup process. It is not a party in the lawsuit.

The Exide cleanup project is split into several segments: the site of the former operating plant, the landfill and the Stewart Creek area. Frisco has also enrolled the buffer property and several of its contaminated parcels in TCEQ’s Voluntary Cleanup Program.

In February, the agency approved Exide’s report on the extent of contamination for the main operating site as well as for Stewart Creek. Plans on how it will clean up those areas are due in August.

As part of the 2012 agreement, the city must pay up to $1.5 million to clean up the buffer land. Any amount above that is to be split equally between the city and Exide.

In its lawsuit, Exide states that the city refuses to pay an additional $500,000 needed to remediate the buffer land. Exide estimates the total cost will be $2.7 million.

The suit also cites Frisco’s rejection of a permit that Exide needs to handle wastewater on the site.

“While Exide works to live up to its end of the bargain, the city has embarked upon a pattern and practice of delay and withholding that is in breach of the parties’ agreement,” the suit states.

A different perspective comes from attorney Kerry Russell, who represents Frisco on environmental issues. He contends in several letters to TCEQ that the buffer property and the Stewart Creek area were originally contaminated by pollutants from the plant’s main operating site. That contamination will continue if the main site is not properly cleaned up, he stated.

“This situation has become a political issue due to Exide’s continued refusal to accept corporate responsibility for its past actions,” Russell stated in a letter in March.

As for the lack of a permit, he wrote last year that it “is on hold pending Exide demonstrating that it will properly pre-treat and remove hazardous constituents from its wastewater.”

The Frisco City Council will discuss the lawsuit in closed session with its attorneys on Tuesday. The city will then file a response with the court in the coming weeks. No hearings have been scheduled.

April 25, 1964: Ground is broken for the Gould National Batteries Inc. oxide manufacturing plant, which opens later that year in Frisco.

November 2008: U.S. Environmental Protection Agency gives notice that it will tighten the federal air-quality standard for lead tenfold because of research showing the irreversible damage from exposure to the toxic metal.

April 27, 2011: Exide announces $20 million in improvements to the plant to reduce emissions and comply with the new federal standard for lead.

May 31, 2012: Frisco and Exide announce an agreement that calls for the city to buy land from Exide and for Exide to close its plant.

Nov. 30, 2012: Exide, which in recent years had been recycling more than 6 million batteries a year, ends all operations in Frisco. Plans to dismantle the plant and clean up contamination begin.

April 2015: U.S. court ruling confirms plan of reorganization that allows Exide to emerge from bankruptcy once terms in plan are met. 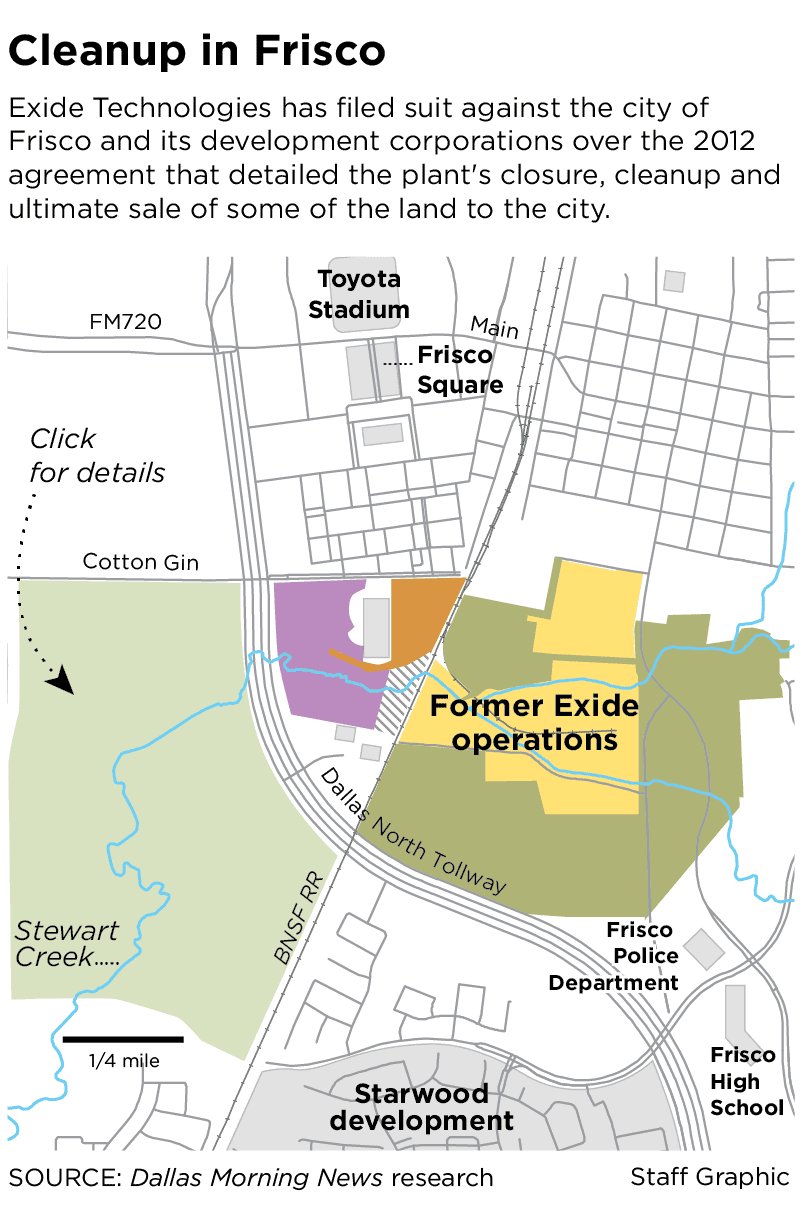